Hawaii Island (USA) is famous for its golden coastline and big waves. But in Kakaako district, Hawaii’s warehouse district, street art, instead of the sea, is the most attractive thing.

Kakaako that located south of Oahu Island in Hawaii, is the commercial and retail area of ​​Honolulu capital. Here, there are no souvenir shops or tourist groups, but will witness an impressive urban art scene. Those are streets covered with large murals. Sometimes paintings are painted on the entire surface of a building.

A lot of paintings carry a tourism promotion message for Hawaii, containing the cultural cues of this famous tourist archipelago. For example, painting a skeleton with a surfboard next to it and a Hawaiian hand waving. Another painted a banana wearing a Hawaiian dress with dancing grass and a gentleman-like apple, showing Hawaii’s welcome. 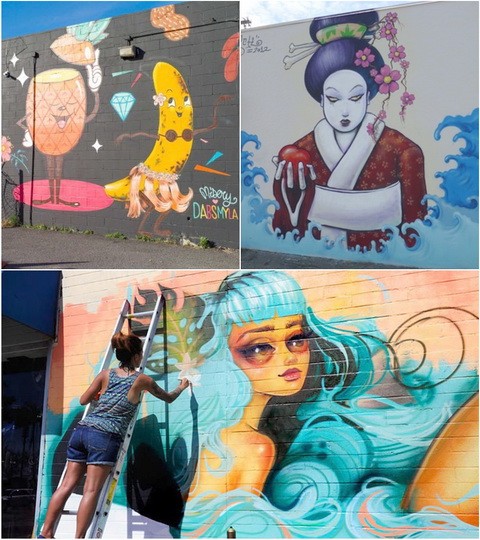 Kakaako is located between downtown Honolulu and the surrounding Waikiki. In ancient times, it used to be a fishing village with native Hawaiians. By the 20th century, Kakaako was industrialized, with cargo warehouses, repair shops and auto shops. In recent years, this region has come down because property owners have difficulties in doing business.

By 2011, artist Jasper Wong had came to Kakaako and sought to reincarnate this place, not by economics but by urban art. Wong founded an art group called “Pow! Wow! Hawaii “with the aim of beautifying Kakaako and bringing people together through art. Artists around the world have followed Wong’s call, come here and paint on the walls, in a place that is gradually degraded.

Wong said that these paintings represent a unique Hawaiian local style, mixed with the style of familiar grafiti in big cities like Brooklyn, Miami, Tokyo and London. In the paintings, the influence of Hawaiian culture and Asian animation culture (anime) is very evident. At the same time, the paintings also helped create the distinct identity of Kakaako and other places of Hawaii.