Enjoy the giant Street Art Giraffes on the Spanish street

The empty and monotonous walls have been painted by Dulk to be extremely cute and funny. Antonio Segura Donat, He is better known by his name as “Dulk” is a Spanish artist. He owns a huge collection of gorgeous Street Art works on his paintings in big wall.

The Graffiti originally meant “paint spray”. The Street art came into being in the 1970s, before hip-hop emerged. It was came from a postman in New York City, as he moved around the streets and wrote his name on the walls. Gradually, it has become more diverse, and used by young people as a way of expressing modernist views and social isolation.

Dulk said that he often gets ideas from his own dreams and from there he can create unique and beautiful works. The Dulk’s paintings often feature the style of fairy tales, with fantasy characters that are cute and lovely. They make people look like a colorful virtual world. Recently at the Asalto Street Art Festival in Spain, Dulk drew a picture of Little Red Riding Hood and the Wolf and many other unique animals.

But the mural in Spain was a surprise. They make the visual space in the political atmosphere tinged with gloomy colors, cheerful and happy. According to statistics, the area has more than 100 paintings, or several new paintings. The district’s website is beautiful, but they like “self-dealing,” and try to wander 500 meters around the house. 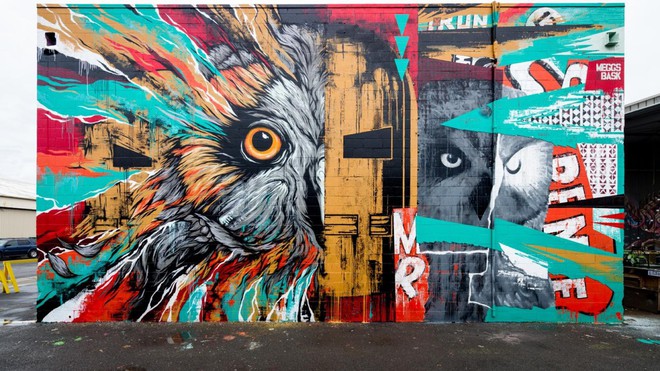 In Antonio Segura Donat’s opinion, If he look at hiphop as a food, The Graffiti is the spice that makes it perfect. Along with breakdancing, rap and hip hop,  The Graffiti has quickly become a tool for young people to communicate and express their “self” in the street, in an art form through spray bottles. This is considered an art form of rebellion.